Skip to content
October 27, 2013 Vicky South
Having had such an amazing day of food thus far, I had to continue down the path of excellence and I went in pursuit of ice cream. I had been dreaming of Chin Chin all week and I became increasingly excited. It started to rain but it didn’t dampen my spirits or my appetite. As usual I became overwhelmed by the choices available but I was determined to try something new. I chose the hay milk caramel with honeycomb pieces and dark chocolate sauce. Chin Chin had yet again excelled themselves but I think the tobacco baked pear ice cream stole a piece of my heart last time. 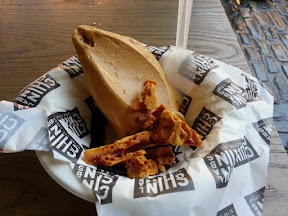 View all posts by Vicky South