I have been fascinated with North Korea (also known as the Democratic People’s Republic of Korea) for as long as I can remember. Now relations with the West have slightly warmed I thought it was the ideal time to visit the Hermit Kingdom.

I entered North Korea through the Chinese town of Dandong. I decided to stay the night there as I was interested to explore a city that is exposed to North Koreans. There are stalls selling North Korean currency and souvenirs as well as a North Korean Restaurant (there were blinds over the windows so sadly couldn’t see what was going on there). There is a river in between North Korea and China and the difference in landscape between the two is striking – Dandong is highly developed with lots of bright lights and sky scrapers. On the other side of the river, Sinuiju was in complete darkness adding to the mystery. 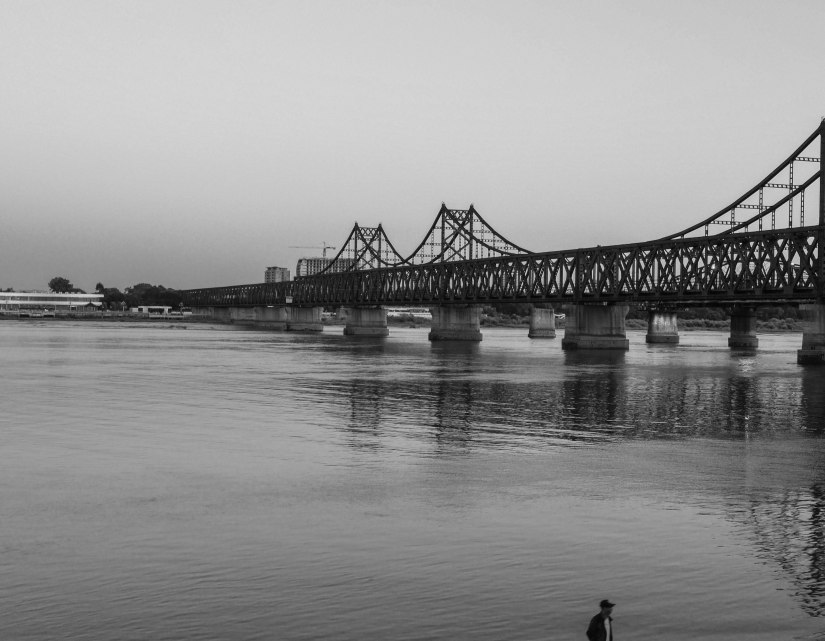 I met a man called John who gave me my ticket outside the station and left me to find my way onto the train. The stations was chaos. Everyone was crowded round the entrance to passport control and customs, I couldn’t really figure out how the queuing system worked so figured I’d embrace the local culture and push my way to the front. It took over an hour to navigate and thankfully made my way through to the train. 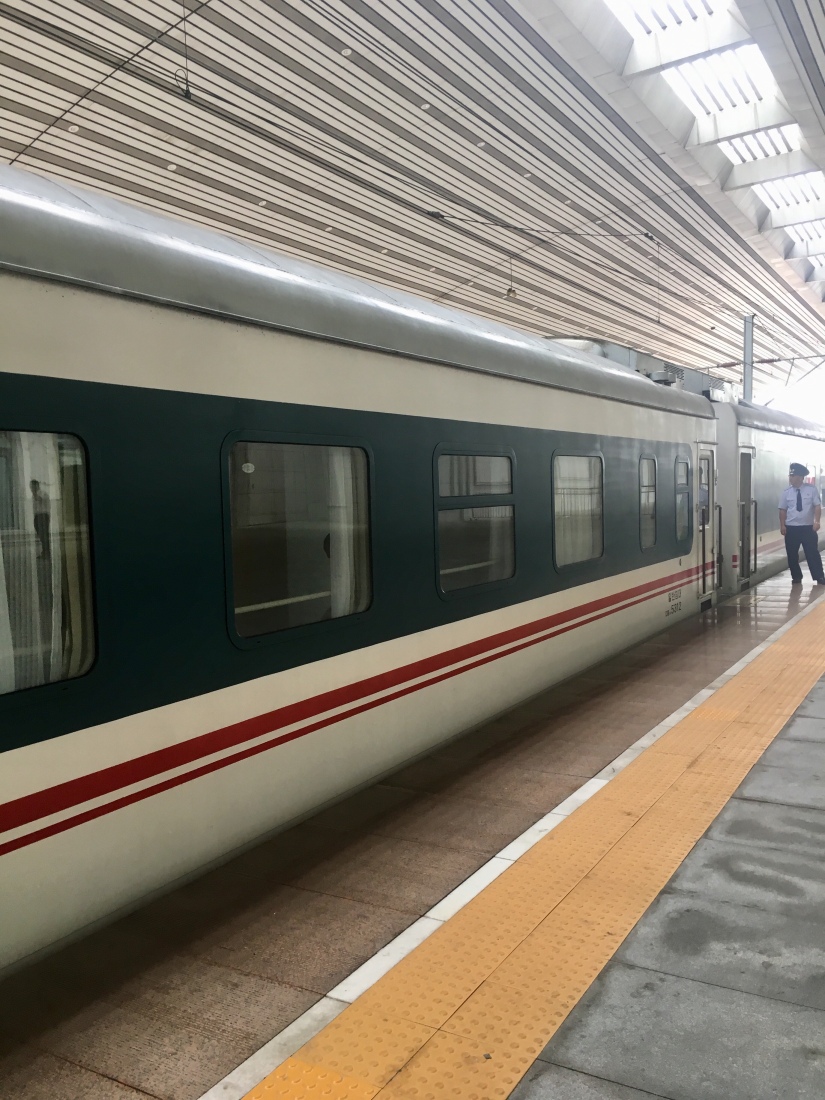 I was given a bed in the soft seater carriage and I was pleasantly surprised. It looked like old Soviet stock but at least it was clean and comfortable. I shared my carriage with a North Korean man, a Swiss guy and a girl from Shenzhen who was going to study in Pyongyang (brave or nuts I’m undecided!) It was also intriguing sharing carriages with North Korean citizens. I had so many questions 1) why were they travelling to China? 2) why had they been given permission considering so many people can’t even leave their town in North Korea? 3) were they bringing anything back to North Korea? 4) How many North Koreans are allowed to leave the country? Sadly these questions remain unanswered.

Patience is needed for this journey. The train trundled over the bridge towards North Korea and stopped in the city of Sinuiju for North Korean customs checks. The officers came into the train and went into each carriage to inspect our belongings and collect a pile of paperwork. The Chinese girl in my carriage was of particular interest to the officers so they spent 45 minutes going through all her bags and even went through her hard drive on her computer. Sadly my Korean is non-existent so I couldn’t understand why she was under so much scrutiny. Another tourist had their North Korea guide book confiscated as they are particularly sensitive about publications which may not depict the country in a positive light. We were over two hours at Sinuiju until all the checks were completed. We then continued our journey into the Hermit Kingdom and I avidly looked out of the window for the next 6 hours to try steal any glimpses I could into everyday life.

The first thing that hit me is that there are no cars, buses or motorbikes on the roads. Within North Korea, there are restrictions on the travel of locals so it makes sense that these form of transport are not prevalent. All work is done manually – farming, repairs, building. I couldn’t see any sign of machinery or automation in everyday life. 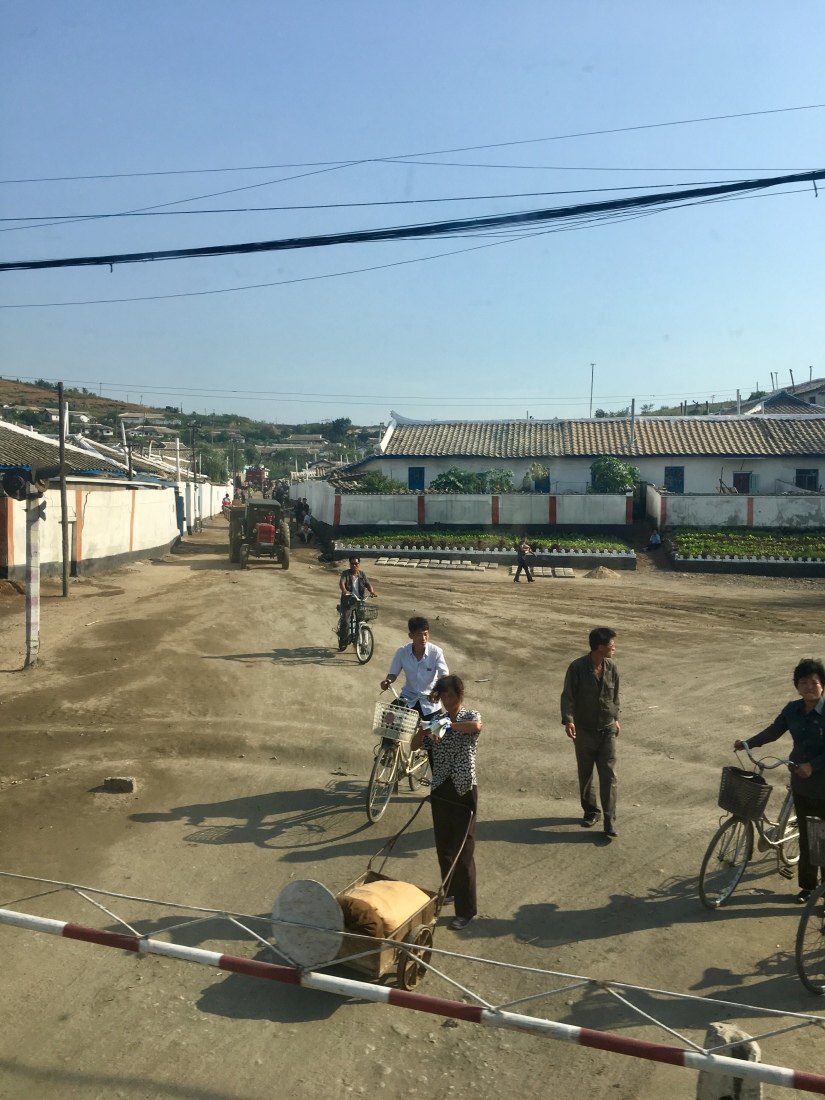 I also encountered my first glimpses of the prevalence of the beloved leaders –  Kim Il-Sung and Kim Jong-Il. North Korean citizens are required to wear badges with pictures of the leaders and there are pictures of them on many of the buildings.

After the long journey, I was relieved to arrive in Pyongyang and excited. Pyongyang was completely different to the villages I had seen on the train. I will explore this more in my next blog post.

Due to the influx of tourists for the 70th Anniversary of formation of North Korea, they had to open up extra hotels as there were not enough rooms available. The lobby was impressive with lots of marble but it definitely didn’t reflect the rest of the hotel. My room was “Soviet Chic” and I’m fairly confident my bed was made of concrete – I’ve never slept on a bed so hard. The paranoia had already begun so I went round my room to see if there were any bugs – sadly I’m not an expert at this and maybe I should just be thankful I didn’t find any! The hotel also had a revolving restaurant at the top but sadly they had put reflective glass so you couldn’t actually see outside, we could only see our reflections.

Food was abundant on the trip, they obviously want to reenforce an image that food is in plentiful supply here in contrast to the famine during the nineties. However the quality of food varied greatly.

Breakfast was usually cold omelette, a couple of vegetables and some cold toast – I will be honest I was forcing myself to eat out of necessity rather than desire. Thankfully someone must have complained and they provided ketchup going forwards which helped make breakfast more edible.

Lunch was usually a lot of small dishes and was not dissimilar to food you may have encountered in South Korea.: kim chi, rice, tofu. Due to ongoing issues with food poisoning, I went vegetarian for most of trip so this limited how much of the food I could eat. 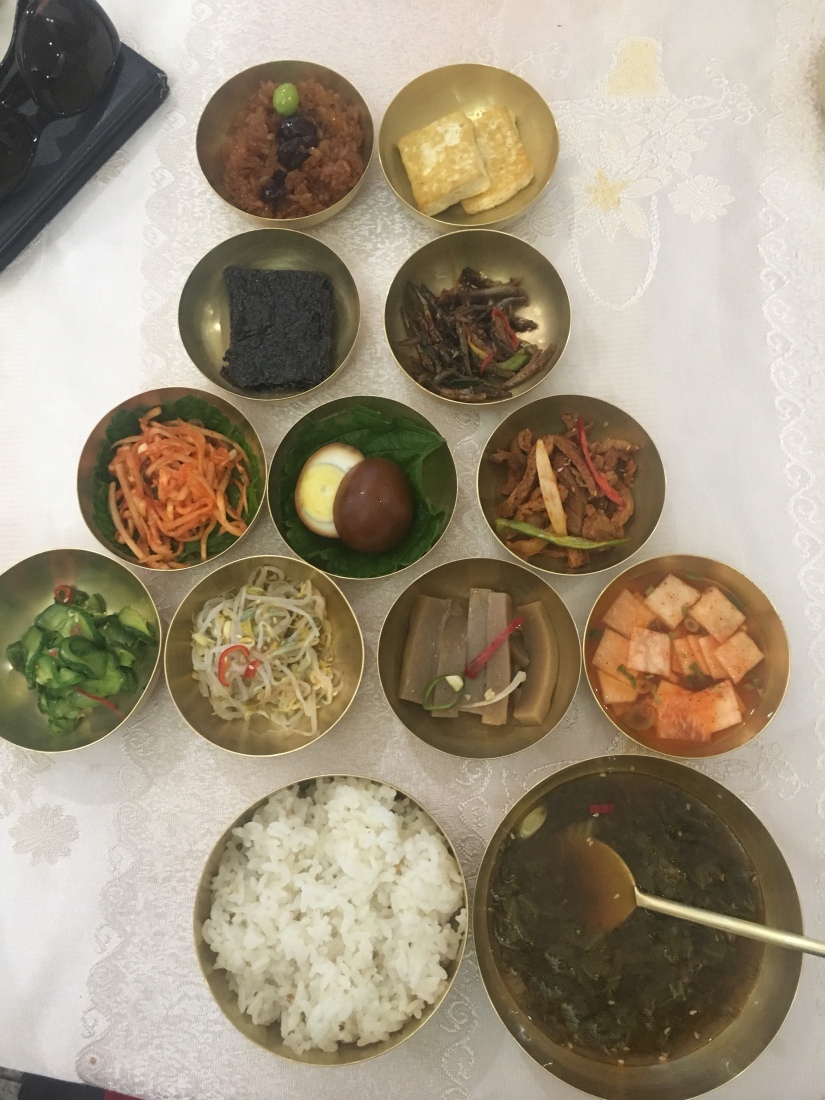 However, I did have one moment of stupidity where I agreed to have dog soup. Dog meat is known as sweet meat and is a delicacy in North Korea. This was stupid on many levels – 1) I love dogs and used to have a dog as a pet 2) I wasn’t eating meat due to food sensitivities I’ve developed and 3) how did I know whether there were worms or parasites in the meat. The bowl of soup was put in front of me and I’m not sure if this was my imagination all I could smell was dog and immediately wanted to vomit. I ate some of the broth but couldn’t go any further than that. I’m sure in my travels I have eaten dog but I’m never done so knowingly. I’ve always been willing to try the weird and the wonderful, e.g. snails, insects, goat etc but I have to be honest I don’t think I can ever eat dog. I know this is probably hypocritical considering I eat other forms of livestock but I don’t think I could overcome the barrier and frankly, I don’t want to!

There were thankfully some more palatable options available during the trip.  I tried Raengmyeon, the North Korean speciality of cold buckwheat noodles served in a cold broth and topped with pickles. It was a very refreshing dish for summer and they even added mustard. 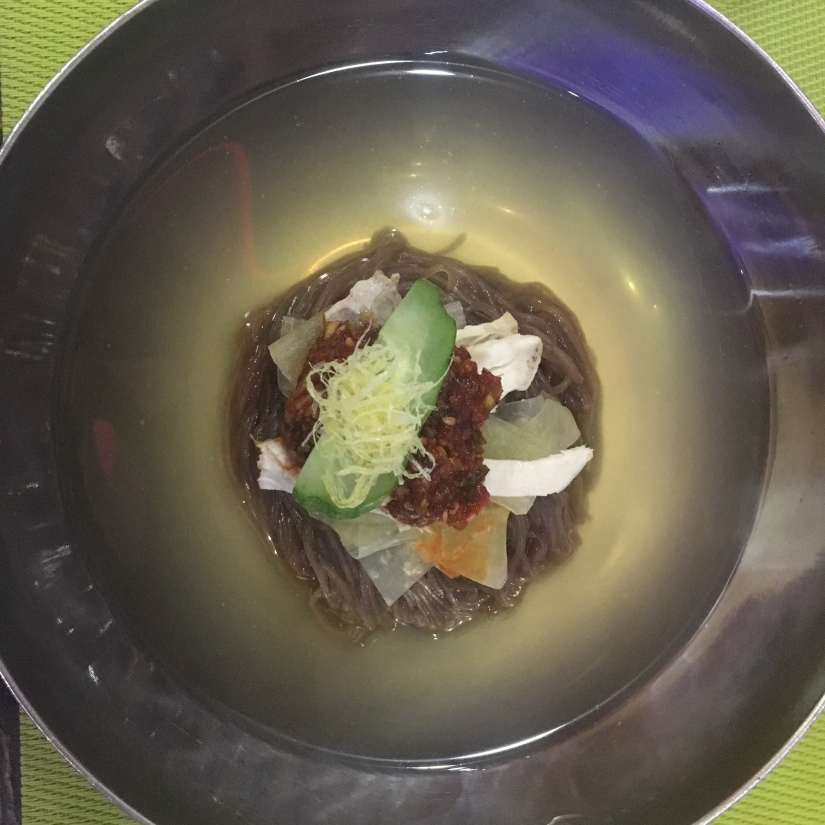 On our final night, we finally tried Korean BBQ although I was still hesitant to have meat. I decided to live life on the edge and tried one piece of duck. There was an abundance of meat provided for the BBQ although a lot of it was very fatty. The one piece I had was very tasty so pleased I saved my venture into eating meat for this meal. Sadly they didn’t have any ventilation so I stank of meat afterwards.

Overall the food in North Korea was fine – it isn’t like Vietnam and Thailand where you are constantly surrounded by an array of exciting, delicious food. Any vegetarian / vegan visiting North Korea should strongly consider taking food with them and be prepared for the fact that there will be a lot of meat around them at meal time.

View all posts by Vicky South